“I am in love with whatever is eccentric, devious, strange, singular, unique, out of this world — and with life as an incalculable, a chaotic thing.”
― Marguerite Young

The Eccentrics generative art project began as a test of a small layout algorithm, and blossomed into something unexpected.

After Inspirals, my first project on ArtBlocks, I starting working on a new concept from scratch. It's a big idea and will take a while to complete. I decided to carve outa few subsystems for the bigger project and tackle those first.

Creative coding often involves playing with tools and techniques until something amazing emerges. But I wanted to be intentional about the message of this new project and see if there were ways to add drama or meaning to the images before the randomness took over.

Many things can give artwork emotional impact, including the subject matter, colors, artistic style, and overall composition. It’s hard to be representational when making on-chain generative art. You can't use existing images or other resources outside of the code. So I ignored the question of subject matter for the moment. Colors and style were already in play, but composition was something I didn’t have a good handle on, so that’s where I focused first. 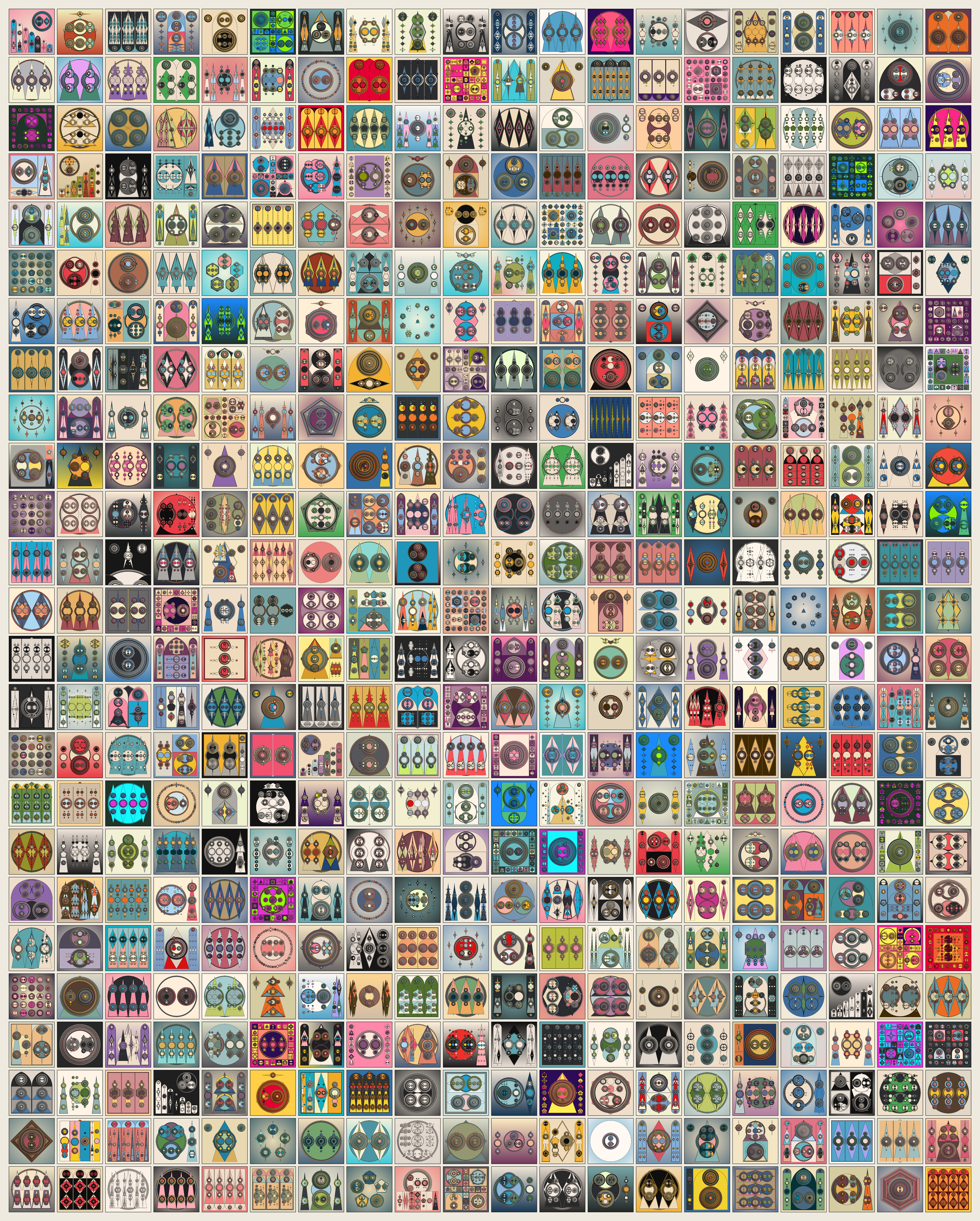 Composition is about arranging the elements in an artwork to convey a desired emotion or effect. You can consider a work's composition separately from its subject matter. Put an element to one side in the foreground to make it seem imposing or even threatening. Place the same element in the center and it can give the image balance and a peaceful feeling. The subject matter could be anything, a horse, a toy, a person. How you arrange it in relation to other elements influences the viewer's interpretation.

Eccentrics started as a layout algorithm that chooses different ways to arrange the top-level elements in an image. There were no intended subjects, only geometric shapes like triangles and circles used as placeholders.

But then the subjects began to emerge. 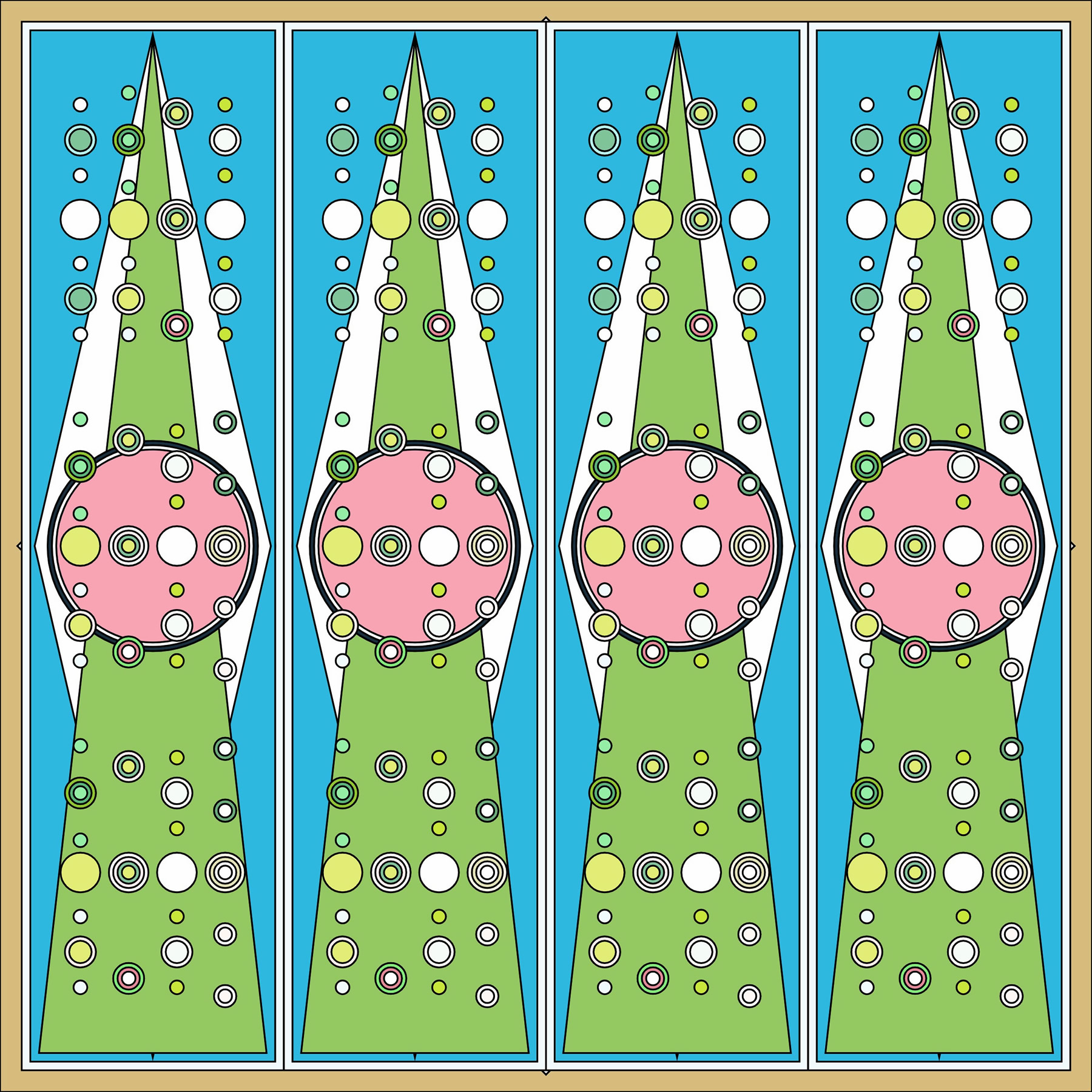 Sometimes the arrangements of shapes looked like towers or buildings. Other times they looked like planets or spaceships. The early test mint on the right looked like some kind of bubbly grass.

And whenever two circles were placed within a larger circle, they looked like eyes. Weird alien eyes but eyes nonetheless.

The test algorithm suddenly got more interesting. It reinforced the idea that composition techniques alone could deliver some drama, or at least an intriguing level of weirdness. I leaned into those vague interpretations to see if this subsystem could become a project of its own.

At its core the algorithm is a layout engine, like a minimal subset of cascading style sheets (CSS). It creates regions and places shapes inside them, and then each shape places another shape inside itself, all the way down. 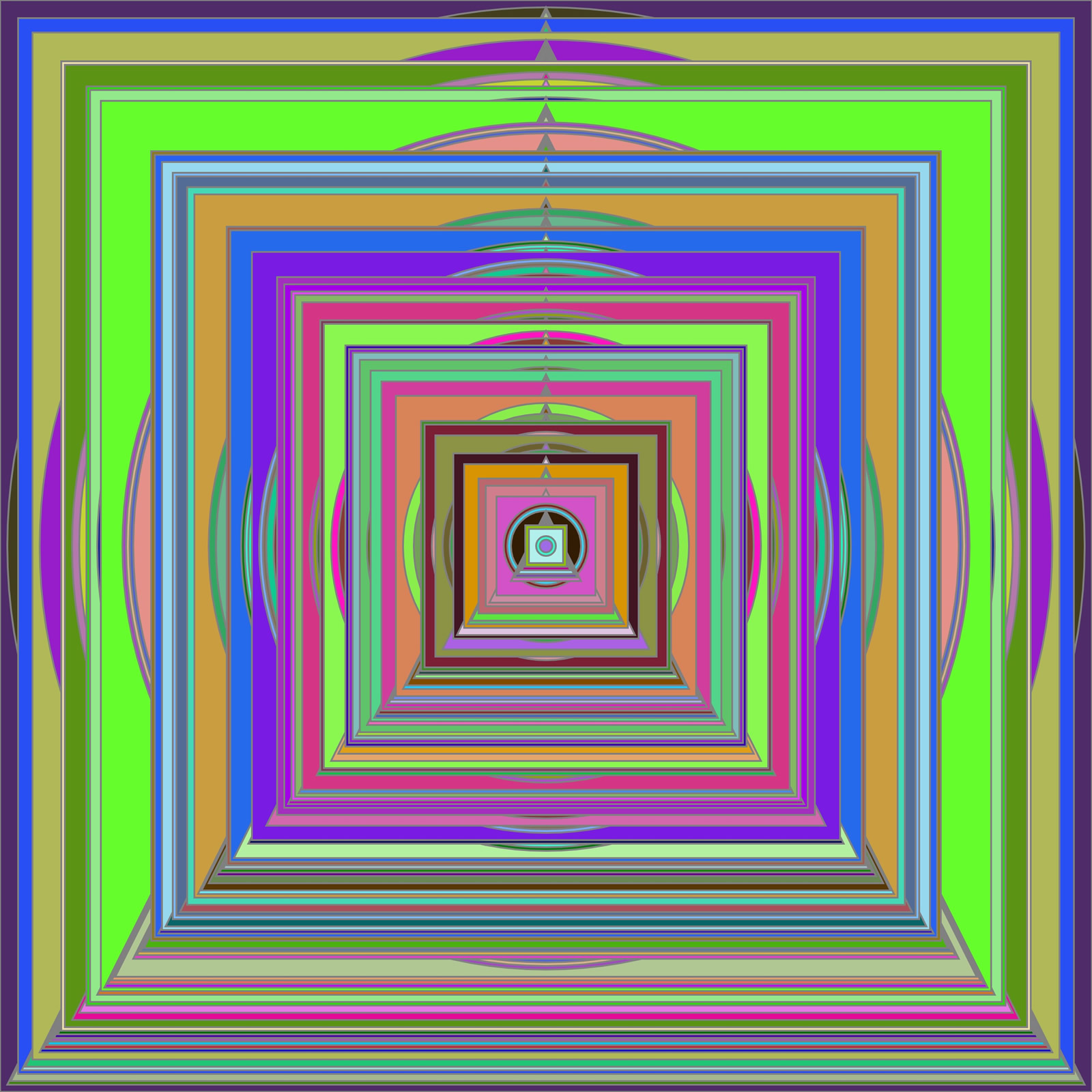 In Eccentrics the layouts are predefined compositions that arrange the top-level shapes. The first layout was simple: place one big rectangle over the whole canvas and let the algorithm put random shapes inside it.

You can see this in one of the first images it generated. It's just one shape inside another, all the way down, in random RGB colors. 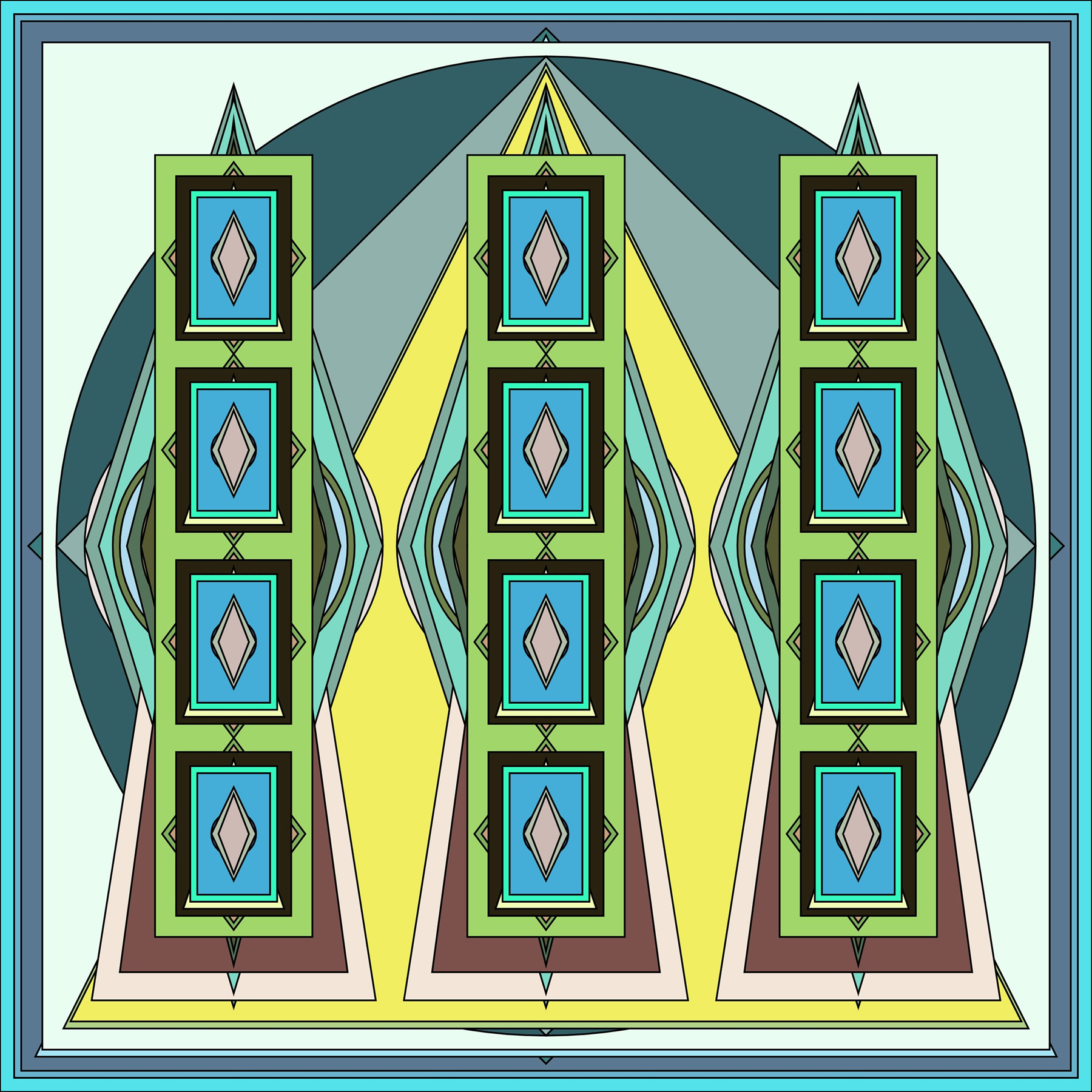 The algorithm's more complicated than CSS in one way. CSS supports rectangular regions on a page but Eccentrics also uses circles, triangles, diamonds, pentagons, hexagons, arches, and more. A large chunk of the Eccentrics code handles the logic and math for calculating inner margins and layouts for all the different shapes.

To add interest, the algorithm was tweaked to allow "splits" which place groups of 2 or more shapes instead of just one. The splits created repeating shapes that often looked like tiles or towers. 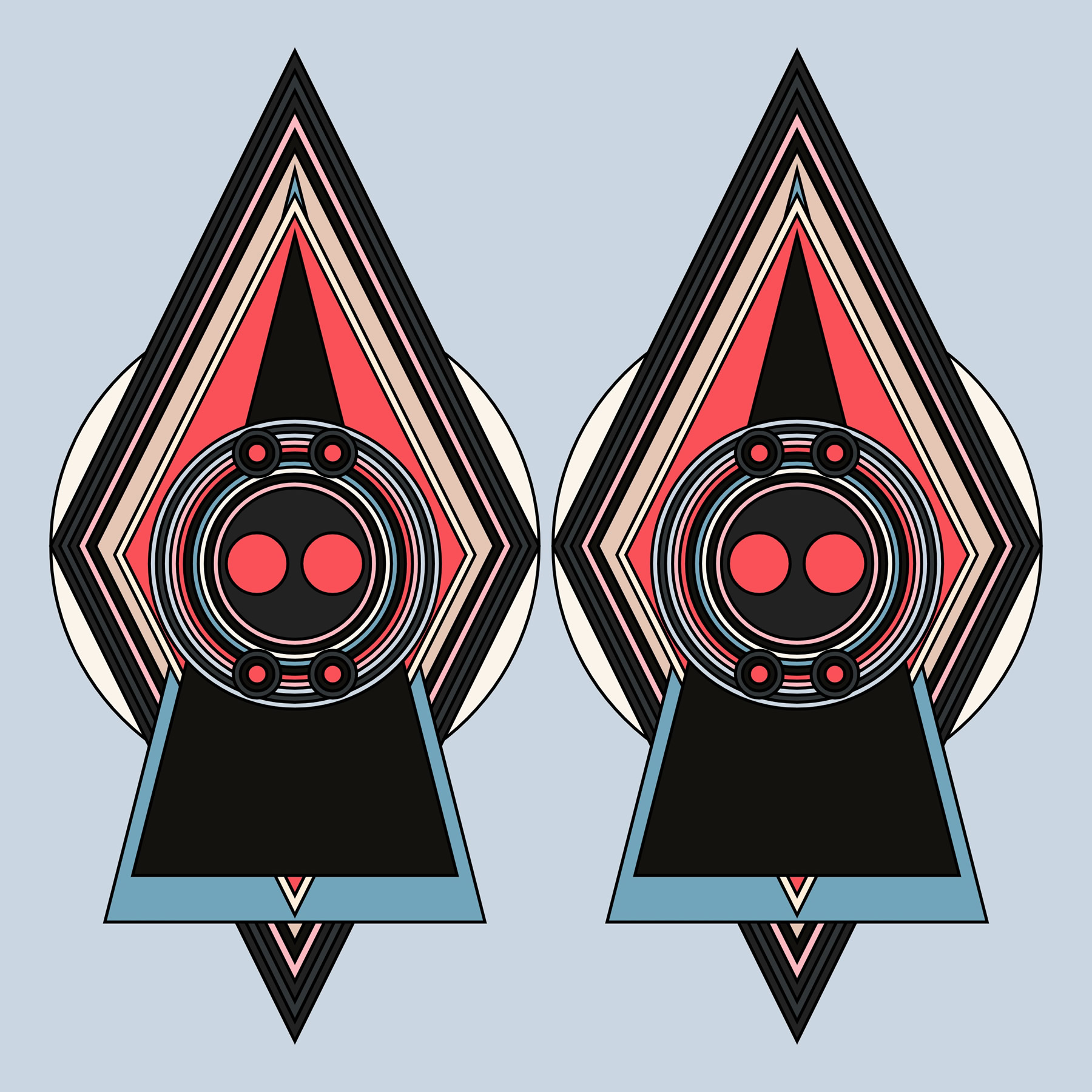 And when a circle splits into two smaller circles, it spawns those eyes.

I wasn't sure at first whether to keep the alien-looking eyes. Sometimes they seemed creepy and other times they were comical. I worried they would make the outputs seem campy and less artistic. But they were fun and gave the whole project a new vibe, so of course they stayed.

At first the splits always used clones of the same shape (plus all its contents) to create repeating patterns. Later I let the algorithm sometimes decide to generate a new shape within a group instead of using a clone. 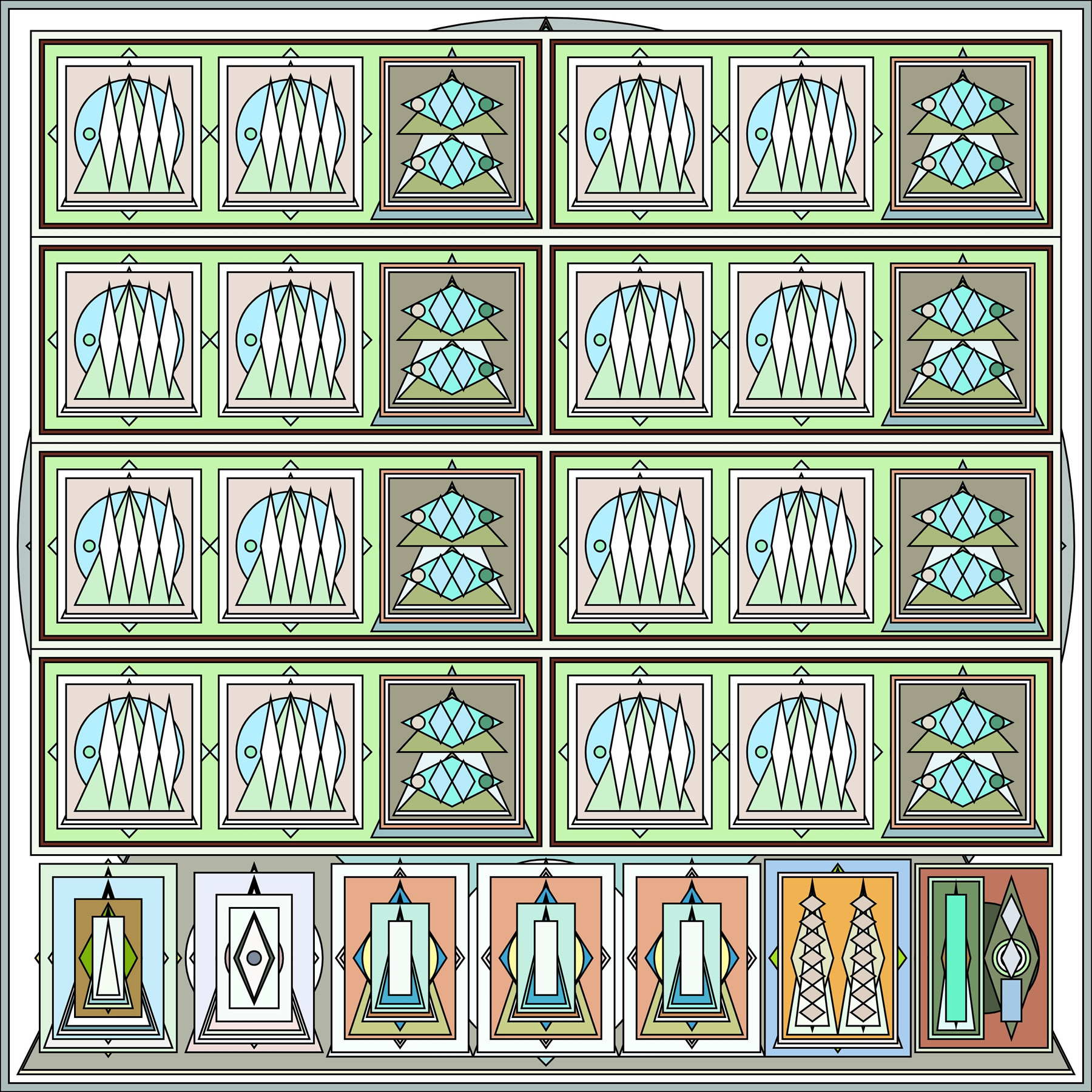 That led to a lot of new variety in the outputs, and became one of my favorite things about the project. It injected human-like flaws into otherwise precise layouts.

This early image shows four cloned, repeating rows of rectangles and diamonds followed by a fifth row that forgets all that and does its own thing. The flaws led to questions about why the algorithm chose to do that, which suddenly made it more intriguing (even though we know its all just random... right?). 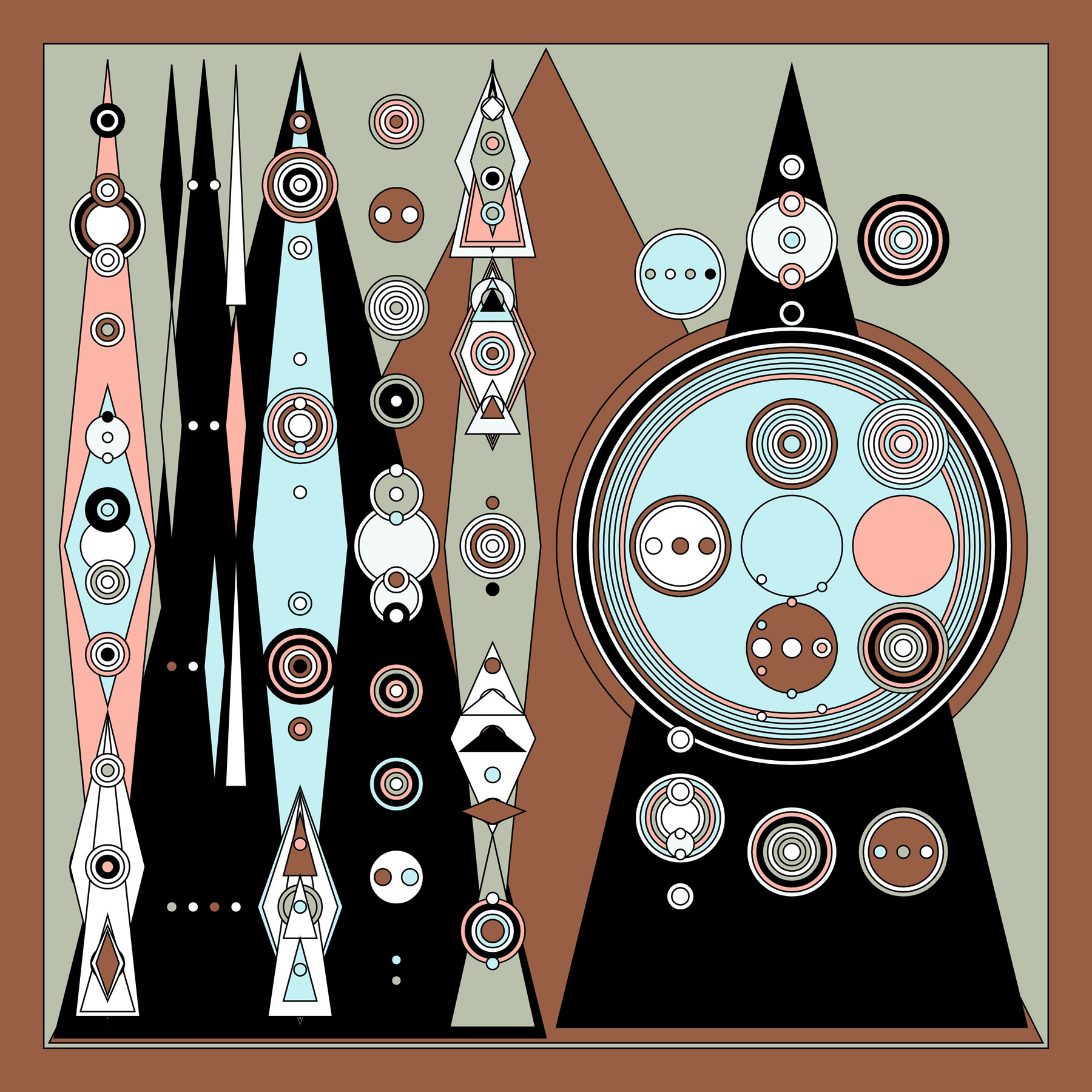 There is even a "No Clones" property that can prevent any cloning in a piece at all. "No Clones" makes some images chaotic, but it can trigger interesting depth and complexity, as in this "Cryptic Pyramids" test mint.

Creating generative art involves a lot of poring over each new output to decide if you like it or not, and if the algorithm needs tweaking. Some artists automate this process and generate 100 or 1,000 outputs in bulk to review later. I'm much less efficient than that. 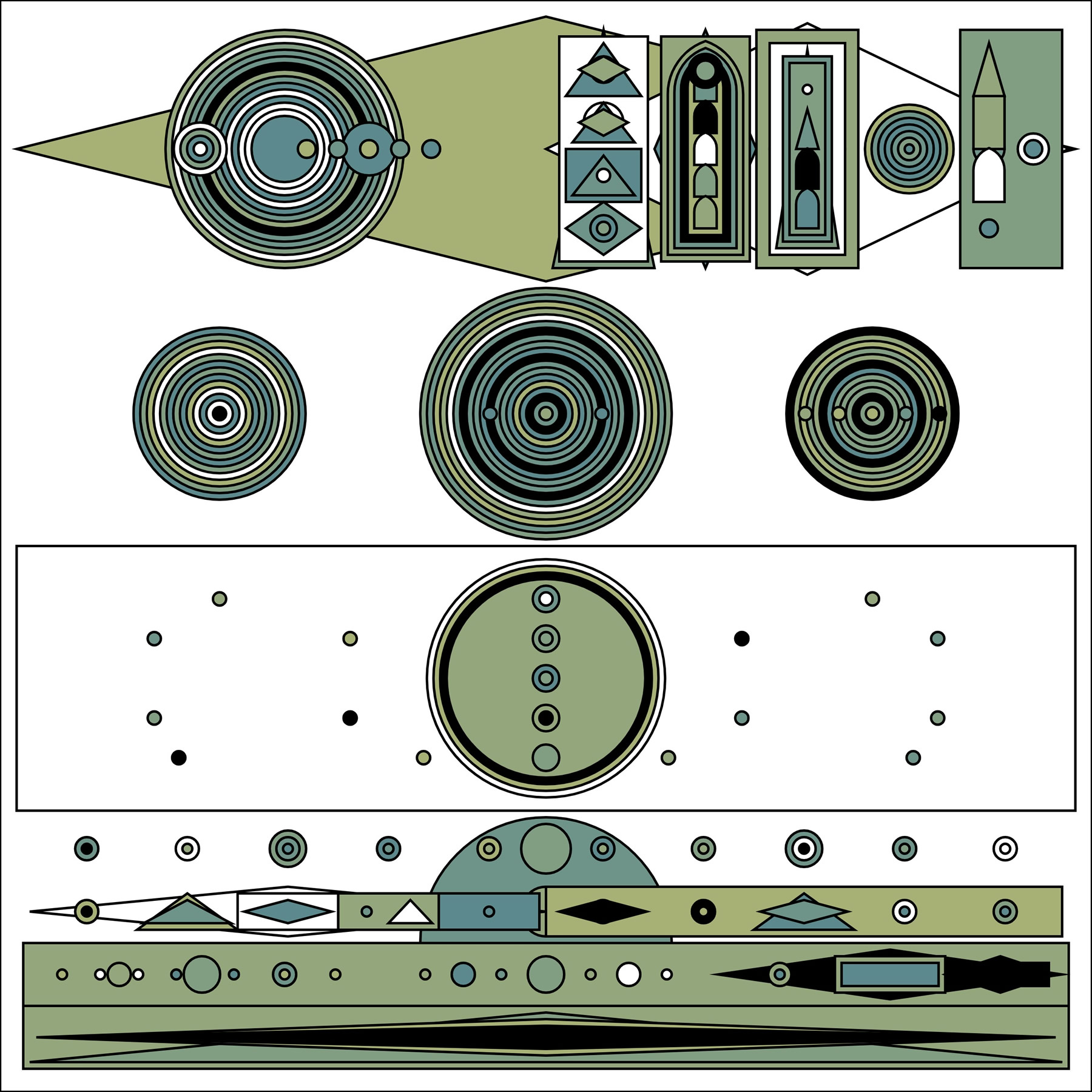 I still like pressing a key or clicking to generate a new image on screen, one at a time. It mimics the reveal that a collector experiences when they mint one. For Eccentrics this was a fun process because every now and then you'd generate one that told a story or made you laugh.

For example, the early test mint on the right seemed mundane at first. But after looking at it a while, it became sequential art telling a story of space exploration. 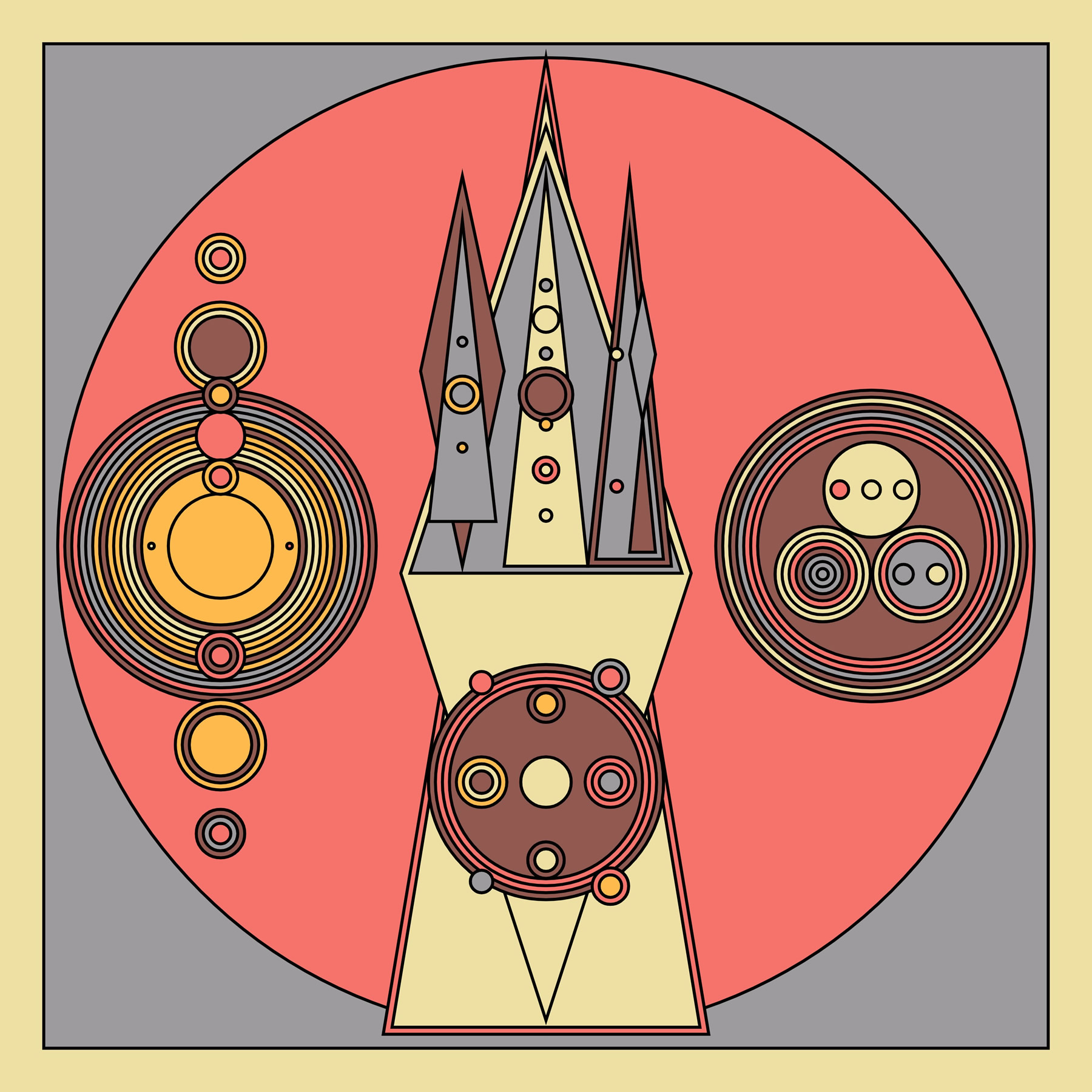 When this next image appeared it immediately struck me as a castle of some sort. There's a pseudo-3D look to it which doesn't hold up on closer inspection. It's just a collection of diamonds and triangles. But the image still conjures the idea of a tall castle in some mystic dimension. Dr. Strange would feel right at home. 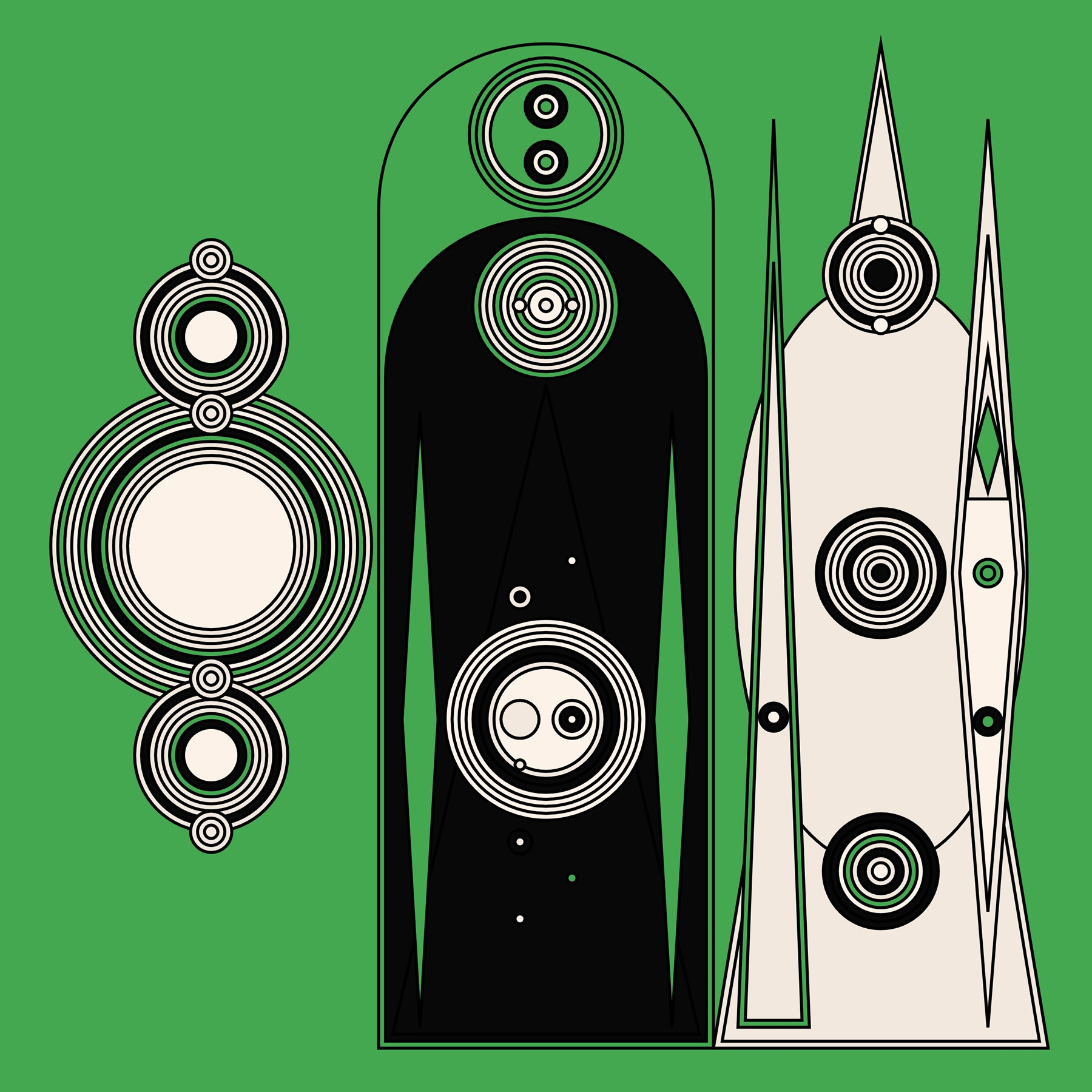 One evening I embarked on a few hours of generating mint after mint to see what might occur. It gets pretty addictive when you are deep in the process. This image appeared and grabbed my attention right away. In the central figure, two tall diamonds that match the green background create the illusion of those long arms.

My kids were in the room. I asked them, "Do you see these guys?" They did, and agreed that they must be aliens. We named this one the "Alien Holy Trinity." 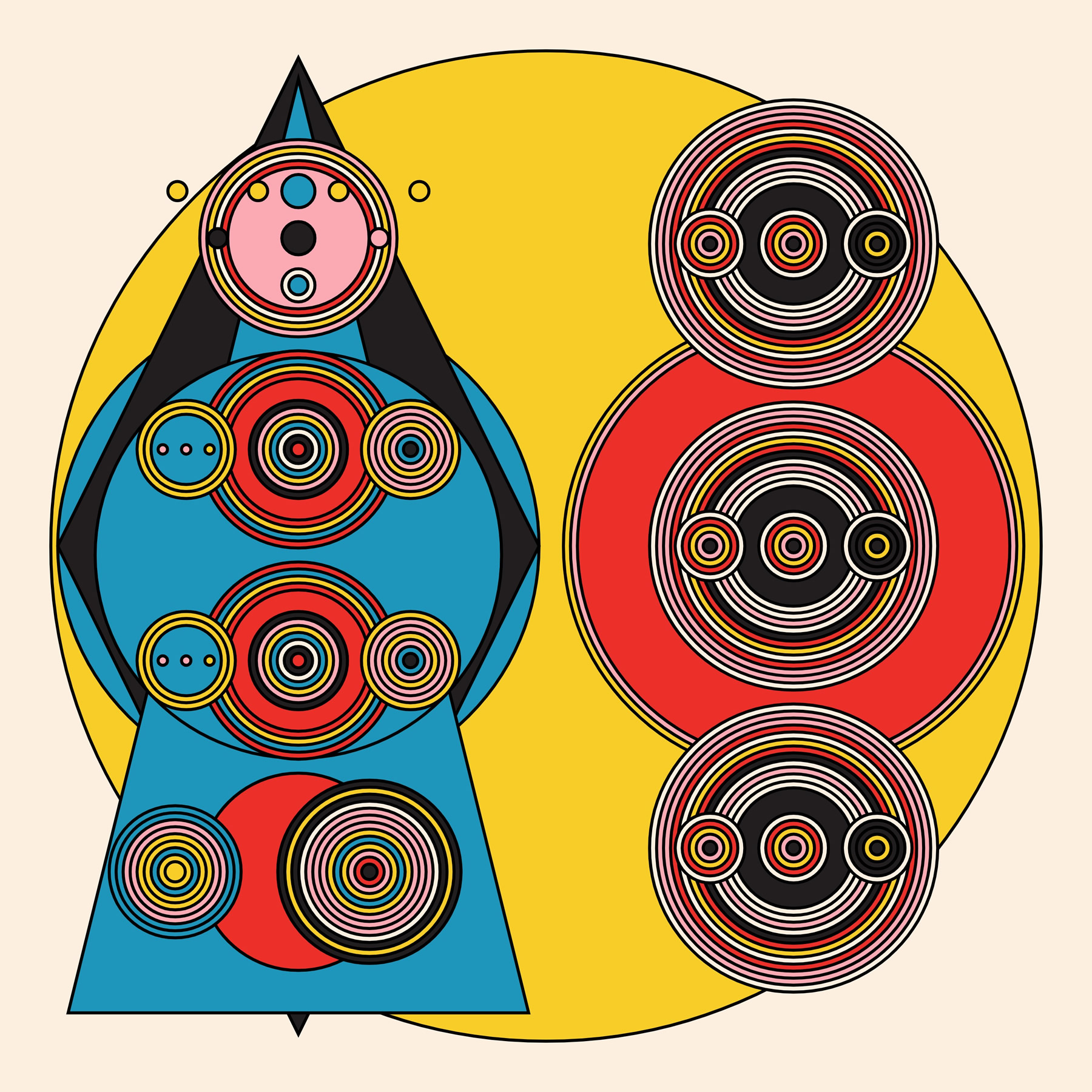 The next image appeared soon after the Trinity, during the same click-generate-and-review session. I almost blew right by it. This time my son saw it first. "Look", he said, "The fat lady's singing!"

If Eccentrics was a short-form generative art project, I might have published these rare story-prompting outputs and left it at that. But as a long form project it needed more work to make sure that every output would be compelling and unique.

With the general layout algorithm working and enough chaos to keep things lively, it was time to circle back to the idea of using composition for effect. That led to predefined layouts, which is the topic for Part 2 of this article (coming soon).